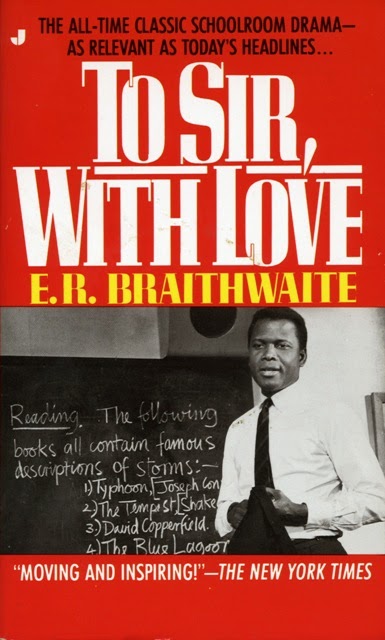 Well, after a few thrillers, I wanted to read something which could touch me and move me emotionally. I searched and searched and after reaching a saturation point, I was about to give up. Then I came across this classic and thought of giving it a shot. To Sir, With love as you may all have guessed is a very intuitive,deep-rooted and touching story. It is about  how a person overcomes impediments faced by  being a black and a teacher in a school filled with brats.Not that it is a new novel but I am reviewing it so that people of today come to know about it and do read it.

E.R. Braithwaite is black by complexion. Living in briton and facing the heat for being black, he is rejected for job offers at various engineering endeavours. What is in the colour? Just because a person is black, should he be subjected to a different kind of treatment?
E.R Braithwaite is an apt engineer and qualifies for many challenging jobs. Wherever he goes, he is rejected because of the color of his skin. Employers, often convinced by his knowledge would often put him down and spin a yarn to reject him. After some episodes, he finally enrolls himself in a dreaded school as  teacher,the school being apparently notorious for the brazen defiance of its students.
Now he doesn't only have to overcome his apparent inferiority obstacles but also the rebellious attitude of his students. His students obviously throw barbs at him. Many Teachers had failed to pacify them for their rebellious behaviour. E.R was determined, he wasn't going to give up; No sooner did he strike an emotional cord with all the students than did the students gradually start getting along with him.It also reaches a point where he gets personally involved with issues which his students face. He gradually feels accountable for his students action and consider them as a part of his. Thats the level of attachment he develops inspite of all the barriers. It also vaguely depicts emotions of a girl who hints at liking him for all his traits that she would blindly accept and listen to his advises.
He also falls in love with a white woman who is a co-worker in the same school. Wonder of wonders, not only did he overcome the complexion issues but also convinced her parents for their marriage. Her parents come up with a pragmatic view regarding the obstacles they might face. The story culminates with all his students giving him a present with....TO SIR, WITH LOVE...written on it.

Marvellous, is the first word coming to my mind when i read this book. It managed to touch me with its deep message. Life comes with struggles from the womb for many, just because of their colour in some areas while some other paratmeters in other parts. When human tries to discriminate a person not on the basis of his knowledge but his colour, creed; when his judgement becomes prejudiced and he tries to call himself a human, lies the greatest irony. The way he gels with the students which even certain white teachers fail to do so is worth it. This reasserts the central theme of the book. The book proves that emotions are oblivious to the color of the skin.
BEST PART:
"Things are easier said than done."  The author reasserts this. Many raise a voice against discrimination but when it comes to implementation, they still have reservations.
WORST PART:
From an emotional point of view, it was terrible reading about the kind of prejudiced judgements he was subjected to.

Final word:
Strongly recommend reading this novel. Maybe one can finish it off in one go.