"I never expected this from you", "I expect a good show from you","You shattered my expectations" are some of the quotes which I heard in the numerous conversations I have been a part of. What is common in them? EXPECTATIONS. We expect a lot from the people around who are known to us. What do you think??Is it healthy to expect??Does anybody know why do we even expect things?Its a known fact that it is the root cause of disappointment...do u agree to these facts? 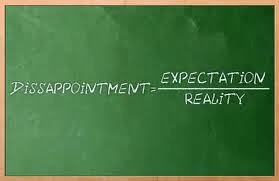 What i think is that whenever we see a person the first time, a variety of factors like his/her persona, his/her way of communication etc creates an impression on our mind. We thereby set a threshold for a persons expected behaviour seeing how he behaves. In our subconscious mind, we create an image of a person. Whenever we come across the person behaving normally, there are no issues but when there is an aberrence from the image created in our subconscious we sense something strange. Thats only because he/she did not keep upto his/her expectations of a behaviour which he/she adheres to generally.  We do so many things without our own knowledge, dont we?? we have started to expect from someone without wanting to do it consciously.
There are expectations from one's own family members. Whenever a person is blessed with intelligence, he or she is expected to do something of a "high acumen". The interest of the person is overshadowed by the expectations which is created around him/her. In this case the person succumbs to others demands rather than his/her own interests. I have seen many intelligent people taking up engineering only because of family expectations and having  no interest of their own. Surely engineering is a good course but some other course maybe not as "relevant" as engineering, has lost them. Such expectations are unreasonable and unfathomable. This also happens because apparently we start revering a course and tag it to be superior while some other profession/course is tagged to be inferior by our subconscious mind. These are all false reasons to some predicaments which had once risen in our mind. I really sympathize with the people who have succumbed to this expectation and have decided to change the course of their life. I vehemently believe that we are born to pursue our passions and we must not believe in such "mirage"(false reverence and expectations) created by some people who later on wont even be a part of our lives sometimes.The perfect illustration of my point is provided by the movie "3 idiots( character Farhan)".
Expectations, apart from in normal friendships, have magnified, one can say, in romantic relationships. So these people keep crying, they will joke by declaring "Really its better to be single". You ask them why??they say its more of problem and there are many disappointments. When you take the pain to investigate, you find either of them had great expectations. I just am unable to fathom one thing: having seen folks from a generation earlier who have been so simple, down to earth, who are bound by marriage, going along well with each other inspite of the normal whims, why relationship these days are broken and are in a state of deadlock? 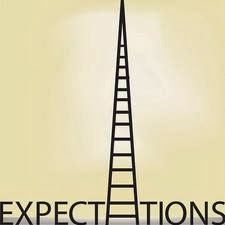 Though I dont deny that certain expectations do exist and they are responsible for healthy relationships, overblown ones are catastrophic. Expectations are related to relationships and relationships are related to emotions. Having written an article on emotions, its really surprising to note the intertwined nature of all three; an imbalance in any one of them has an adverse effect on another. Let  not the boat of life sailing in this vast ocean of uncertainity be capsized by the imbalance in any of the three factors stated earlier: expectations->relationships->emotions which again leads to expectations. (All the computer programmers out there, a circular linked list is what one observes amongst the three factors..:p).Let us also bridge the gap between expectations and reality. Lastly I would like to end this blog on a famous quote:
"Persons appear to us according to the light we throw upon them from our own minds."
-Laura Ingalls Wilder
Posted by Anirudh Rao at 3:00 PM