Scathing summers followed by torrential rains, this is something which Rick did not appreciate. Left alone, high and dry in the heat, each day would count as he struggled to earn few bucks just so that he could feed his family. His days were successful if he could feed his entire family a satiating meal.  He would often look at the huge glass buildings and wonder what happened in these edifices. One thing he could not think of at his stage is getting into one such building and fending for his life there; for his lack of education. For him, this was an ideal life, he felt people wearing suits/blazers were living a life which any person would desire.
Rachael on the other hand, worked in the edifice which Rick admired. She would get down from her Mercedes at 9 AM and her day would begin with a few salutes by her subordinates and a cup of tea. She was a star performer at office and folks respect her for what she is. 10 hours a day, Rachael would have a time of her life but one thing she did not look forward to is going home and spending time with self.  She was 31 and a successful professional at work but one thing she could never achieve is having a company of a loved one with whom she can share her joys and sorrows. Rachael's Father passed away when she was 20 years old and she huddled her way up by hard work. Her typical day at home would be swallow a few pills to curb diabetes, cook food which does not add to her health issues and eventually get done with the day. She had a negligible social life and weekends would be just as unkempt because she would have nothing to do and wait for a Monday.
Who lived an ideal life? Is it Rachael or Rick? Rick had a family to look forward to but his struggles were to feed them. He imagined that people like Rachael lived an ideal life, getting down from an expensive car, getting respect from her subordinates and being successful professionally. Little did Rick know the costs Rachael had to pay to get there, it came at a cost of not having a loved one, having lost her parents and currently, having none to look forward to.
This reminds me of the adage: -  'The grass is greener on the other side of the fence'. We might objectively see one aspect of a person and feel he/she has achieved it holistically and is living a very good life. What is a good life after-all? Again it depends, for some, it is money, for some it is satisfaction through different forms which money might not bring and for others, it is as simple as having a family to look forward to. One of the greatest flaws in a human being is to look at one aspect of someone else's life, without understanding the kind of sacrifices involved. Although I would concur that Rick's basic necessities were under threat but his perspective of Rachael's life was far from reality. Nobody lives an ideal life, and everything they have currently is accounted by tremendous amount of sacrifices in various forms. As I end this article, I remember the success iceberg: 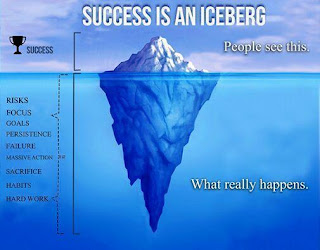