"The local arriving on platform number one is....." goes an announcement in one of the stations in Mumbai.Following the announcement comes the train, fully loaded with people. There will not be any time of the day when people don't stand on the footboard of the local train. Inspite of so many seats vacant inside, the footboard is always crowded. People wont mind getting down and then boarding the train again at each stop for others to get in and for them to retain their coveted "footboard position" . When I speak of Mumbai, the very first thing by default which comes to my mind are the local trains which are also anointed as "The Lifeline of Mumbai". The tracks which are a few metres wide and enduring tons of weight daily have the capacity to transport myriad number of people which a road of equal width can do but with great difficulty.
When you go ambling on the streets of Mumbai , the footpaths can be sometimes occupied by small stalls(thellas). Here, you get all sorts of edibles, accessories for a reasonable rate. "dus ka do"(10 for 2), "nahi rukiye madam, aat mei leke jaeye"(wait madam, take this away for 8 bucks) are some of the common statements heard while the transactions are finalized. We can find any item properly packed and showcased in a hi-fi shop or the same item found with the street vendors(maybe of a different quality though). A city of extremes, made for those who wish to survive lavishly and also for those who are on an austerity drive but uncompromising on the items to be purchased.
Mumbai can also be coined as "A city of chances, probabilities". One can never predict when and how can he\she succeed. People start with small businesses and start-ups and sometimes become millionaires while some of them go for a toss. It can also be coined as a dense forest of "buildings" where the number of people residing in a building can be equated with the number leaves in a tree. I have been residing here since my birth(21 years) and it was absolutely a wonderful experience. I have traveled in the buses, the trains and more than half of my life in Mumbai goes in travelling. Travelling gets even more challenging during the rainy season when majority of the trains are late, trains are overcrowded with apprehensive people willing to rush home early.It's just like an adventure where occurrence of events is dynamic.
Criticism is something which is not very uncommon here. Waiting for a bus in a queue for a long time and seeing how unjustifiably buses are diverted to certain locations, walking on the road densely surrounded by people, common altercations amongst co-passengers are some of the situations which lead to a lot of irritation regularly.The absence of some solitary space while doing our daily chores is unfavourable sometimes.Another thing very common among Mumbaikars is their apathy towards socialisation. I find scarce socialisation here and people hardly come out of their houses and take efforts to speak to others. People are reluctant to get out of the 4 walls of their house. This can partly be blamed to the excessive obsession with electronic gadgets or the increased lethargy among citizens. Interactions with neighbours is at a all time low. We also think twice before acknowledging an acquaintance with a smile as if a smile costs a million dollars worth energy. Instead a smile spreads positive vibes worth more than a million dollars.
Mumbai has a lot of good things to boast of starting from the delicious Mumbai chhat(found nowhere else in the world), the vada pav, pav bhaji and needless to mention and describe the plethora of landmarks and places(fashion street, the various temples and other religious shrines,the gateway of India....and the list is very long) which are uniquely special in their own way. The spirit of Mumbaikars is something worth admiration. Irrespective of so many blows and losses, people have never failed to rise again to show the world that they are unstoppable. The absence of socialisation is compensated by huge gatherings during festivals. Celebrations galore here with every festival celebrated with equal fervour.I really salute the people who go out of their way, remove time out of their busy schedules making arrangements for the festivals. 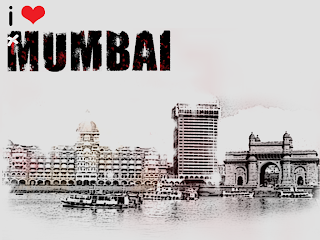 People residing here may have many issues to raise a hue and cry about but have never ceased loving this place. Once accustomed to the fast-paced life of Mumbai it becomes difficult to adapt to a slower and much relaxed life but one can live under the worst conditions as well. Mumbai-life has made me rough and tough.I, a resident of Mumbai, the city of dreams, vehemently state....."Mumbai meri jaaan hai(Mumbai is my life)"